The "Travelling Players," sculpted by Mark Copplestone, were a subset of the Citadel Miniatures C46 Villagers range. They are in much demand today by collectors, particularly those who collect old Empire figures. Orclord gives a good summary of the range on his Stuff of Legends page:


The Travelling Players were never designed to be a special set, according to Bryan Ansell, they were just a collection of new c46 sculpts thrown into a particular mail order offer. They have, however, become extremely collectable. There are 2 illustrations of the range, one in White Dwarf 96, page 64 which shows 22 pieces and the other in an October 1987 mail order flyer which shows 25, additionally including the Lute Hero, Flake and the Loudmouth. The names on the ads and on the slottabase tabs are in some cases different, the Flake, Loudmouth, Ruffian and Thug all being marked Gypsy on their tabs. Several of them were slightly modifed and re-appeared in the 1988 Townsfolk release. 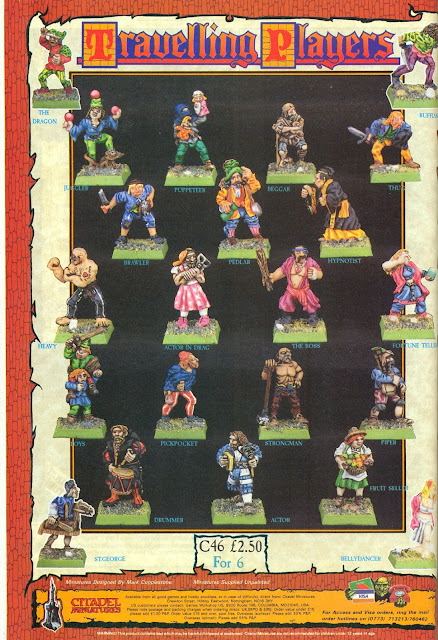 I've managed to locate 24 of the 25 Players in Bryan's collection, and I have been unable to locate the Strongman figure. The figures below are the actual ones depicted in the White Dwarf advert above, which means that the three Players which were NOT depicted in the advert - the Loudmouth, the Lute Hero and the Flake - can be seen for the first time in their painted state below. I dont know why they were left out of the White Dwarf advert.