I'm currently in the process of painting up a small group of 1980's Kev Adams Citadel Miniatures Orcs, and I've been thumbing through back issues of White Dwarf for colour scheme inspiration. In White Dwarf 87 I came across this unusual 'Eavy Metal article - other than displaying images of some lovely old painted orcs and goblins, it didn't really have a painting or modelling component. Instead it focussed on an army list that tied in with the recently published Ravening Hordes.

The introduction to the army list indicates that it "is intended for friendly games not the Warhammer League." I'm not familiar with the Warhammer League - is it an early incarnation of the tournament scene? If it's something you were involved in could you leave a comment and share your experiences?

The back-story to the army list centres around an impending conflict between the goblinoids and the dwarfs at Blackfire Pass, which is a "legendary battlefield" in today's Warhammer. I don't know if this article is the first time we have been introduced to the Pass?

All in all the article presents us with some wonderful and inspirational old painted figures, the usual humorous back-story we have come to expect from the likes of Halliwell and Priestley, and some very entertaining troop choices such as the goblin fanatics, snotlings and lead belcher. I'm tempted to put together a similar force for a future battle: I'm a big fan of troop choices with random consequences! 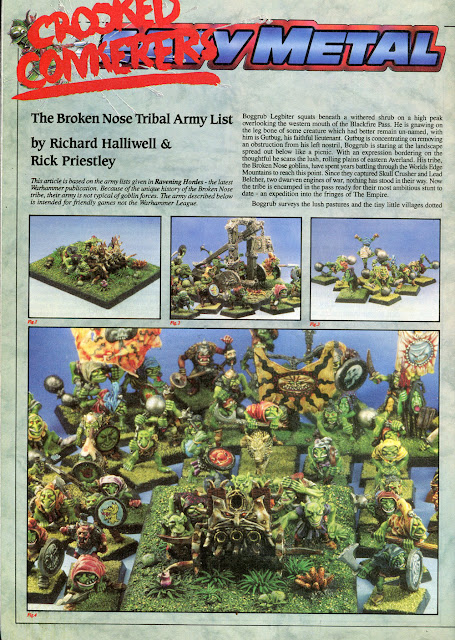 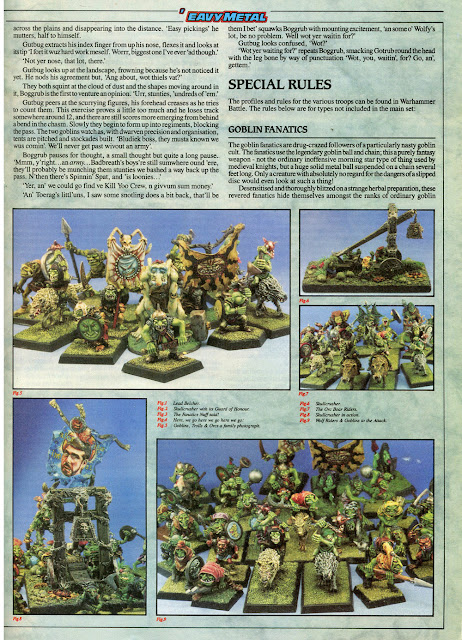 Broken Nose Tribe by bridgend_steve
Posted by Steve Casey at 10:37