So this post marks a bit of a turning point for me: I've recently been bitten by the historicals wargaming and painting bug. I seem to have developed a fascination with the "little wars" of the Victorian era, and I'm also turning my attention to WWII gaming in various scales (but more of that another day). To kick it off, here are a couple of rather splendid Afghan command figures from Wargames Foundry, suitable for a range of conflict in the 19th century: 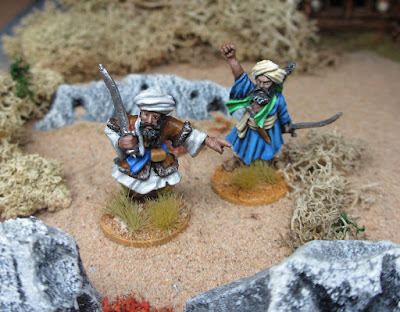 I've painted them almost exclusively with Foundry triad paints, and even gone for basing them on pennies for that traditional feel (OK, I may have done that while I'm waiting for some 20mm round mdf bases to arrive). I would particularly recommend the various Foundry skin paint triads; these figures were painted with the near eastern triad which works a treat.

I'm going to be starting a rather large project soon, based on the Indian Mutiny of 1857. It's a particularly versatile conflict from a gaming and painting perspective due to the variety of troops (and consequently uniform design) and size of conflicts (skirmishes to sieges) involved. Hopefully I'll have lots more to update you on that soon.

So where does all this leave my hobby in terms of Warhammer fantasy and 30k/40k/RT? Well, for the time-being that side of my hobby will be shelved so I can concentrate on the historicals, but I'm sure I'll feel the urge to paint the occasional figure as a change (given the number of historicals I have planned!).

I had wondered whether to start a new blog, but I thought what the heck I'll just continue with this one as an extension of documenting my hobby. I have tinkered with the look, however, because I fancied a change.