This is the start of something big! I'm embarking on a project to paint and wargame the various forces involved in the Indian Mutiny of 1857, an event that sent shockwaves through the British Empire. I'll be documenting my progress in the hope that it will keep my momentum going - I have a lot of figures to get through!

So to kick off I've been basing some mutineers, and some horses for warrior cavalry: 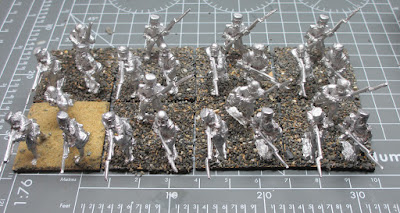 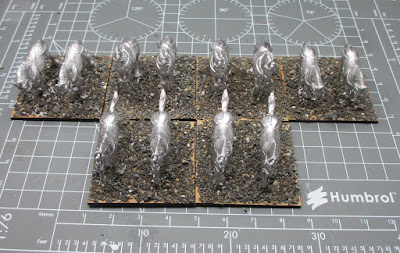 I've opted for 3 figures per base for the foot troops to represent a less organised or skirmish type formation. These particular figures represent Indian mutineers who have partly or entirely abandoned their service dress, and who are on the rampage. I have some other mutineers who are still entirely dressed in service dress, and I'll be basing those differently (more to follow later).

I've used a coarse grit initially on the bases in order to bring the base material up to the level of the metal base tabs of the figures. I'll then be applying a finer sand scattering to mimic a desert type base (as in the bottom left of the foot troops image). I'll also be painting them of course, and applying some scrub material.

The figures in question are from Wargames Foundry, and are the usual excellent quality Perry sculpts. They are IND117 Mutineers in Jacket and Dhoti, IND228 Tribesmen, and IND221 Cavalry with Swords. Foundry are running a great bonus pack deal at the moment, but you'll need to get your orders in by January 5th!
Posted by Steve Casey at 09:29