Now for something completely different! I have to confess I've had a soft spot for Forge World products for quite some time, but I haven't attempted to paint many of them as yet, and certainly nothing this big - a Questoris Knight Magaera: 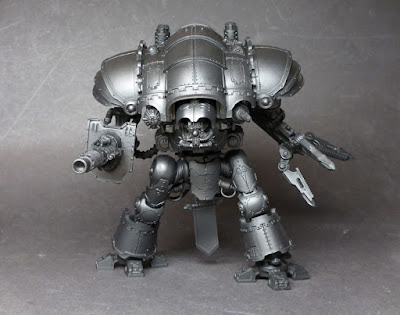 I've assembled the beast and primed it, so will be turning my attention to painting it next. I'm going for a House Malinax paint scheme, which was a traitor House in the Horus Heresy.

I'm going to be largely using an airbrush to lay down the larger expanses of colour. Not exactly a first for me, as I've had an airbrush for some time, but my first attempt a few years back was a disaster! So much so that I walked away from it for some time, but after watching some Youtube tutorials I gave it another practice on some other figures and I'm much happier with it now. So I'm really looking forward to how this turns out!
Posted by Steve Casey at 20:41