As many of you will be aware, Kev "Goblin master" Adams is currently working for Bryan Ansell, producing loads of various greenskins for Warmonger Miniatures, and is also working on a range of chaos beastmen types (not yet released). I was fortunate to share the Warmonger stand with Kev at the last Salute, and after having a good old chat we decided that Kev's collection of vintage painted figures needed to be photographed for posterity. The majority of his collection is at his parent's house, who were wonderful and generous hosts for the day. So I set off with Kev and a camera in early July to take some pictures.

What I saw blew me away! This is the site that greeted me when we arrived at Kev's parents' house: 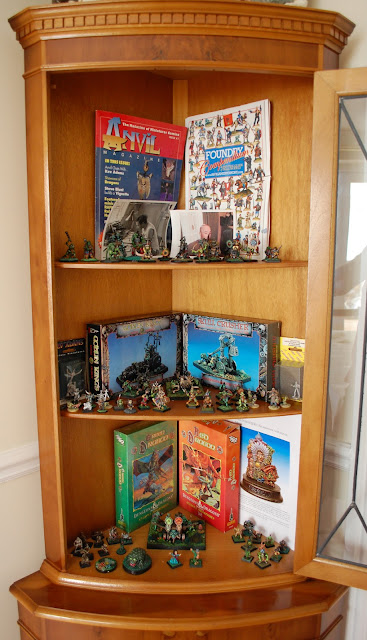 Kev's figures are painted wonderfully (all by Kev of course), and are full of character. There are some pretty jaw-dropping conversions in there too. And special mention has to be made of his shields!

I took loads of pics, and so I've decided to split the images over several posts; every single one of the figures you see above will be revealed in great detail. If you're a fan of the wonderful Heroes for Wargames book then you will have noticed some of Kev's figures in there. His figures also appear in various White Dwarf features (for example, the Broken Nose tribal army) and the Warhammer Armies book. Right click on the images below to open larger images.

First up is the figure that got Kev a foot in the door at Citadel. But it's not one of his sculpts (it's a Tom Meier), rather it's a figure that Kev painted for a Citadel painting competition: 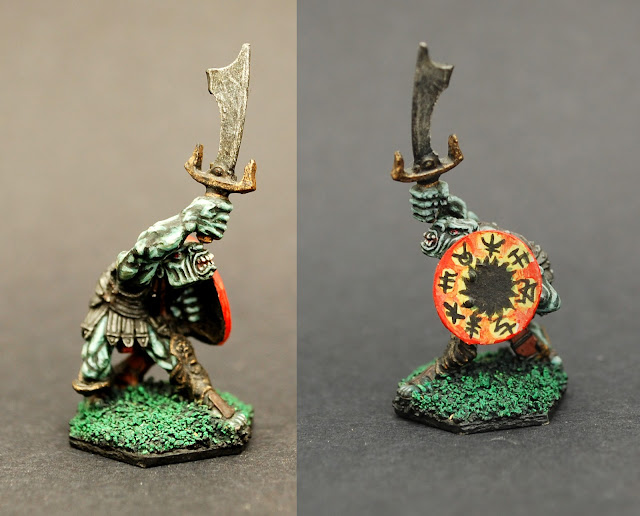 I entered the Citadel painting competition with that Ral Partha half-orc and called him Glarn Cackle Pain. It was in the top ten and shortly afterwards I got a standard letter offering me a chance to paint for Bryan Ansell; I met him in London at a games day and was given a selection of Slann castings to paint. I painted them to my best standard and became a regular painter so got to know Bryan and would visit shows while worming my way in :)

I had already started to swap weapons on duplicate models and wanted some green stuff, which was hard to find in those days being an American product. Bryan sent me a manky looking squashed pack and I treasured it and set about practicing textures like chain mail and fur which I couldn't do with Milliput. Bryan had offered me a job as a mould maker and I had met Blanche and the twins plus the other staff but didn't fancy living in Eastwood at the time but we remained in touch.

I met Chaz Elliot at a dragon meet in London and was blown away by his painted models, especially the orc std bearer conversion . Look at that orc standard bearer conversion in my orc army in that GW book (Warhammer Armies) where it shows me in front of the army; it's Chaz's work and the army is Bryan's really and you can see the std bearer. Chaz got me into using acrylics and this led me in to an exciting new direction. Chaz also gave me my first tips on using putty when he stayed with me in Cambridge and I was soon making new faces on night goblins and it all went from there really.

The orc standard bearer that Kev refers to can be seen on page 98 of the Warhammer Armies book: 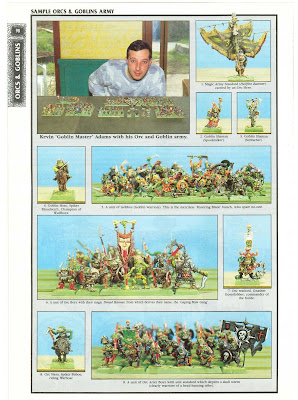 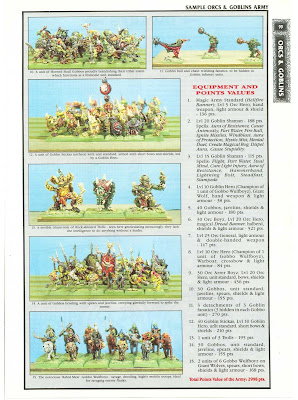 (Many of the figures from this army were on display at Wargames Foundry for this year's BOYL event; see this Realm of Chaos 80's post for pics. I've also blogged about some of them previously).

So what happened next, Kev?

I made the ogre's head and was excited at managing to do the ears so decided to go all the way and make a complete model, this was back in 1983 I think. Bryan was very impressed and asked me if I had any more so I said yeah, several goblins. Soon after I made a few other models and the two large goblins that you see painted were two of them; they were cast but never put into production as they were received as test models.

I'm pretty sure that when Kev mentioned the ogre sculpt he was referring to the figure that was eventually released in 1985 as the Giant Hill Troll (although he could have been alluding to an alternate version that has been mentioned previoulsy on ROC80s): 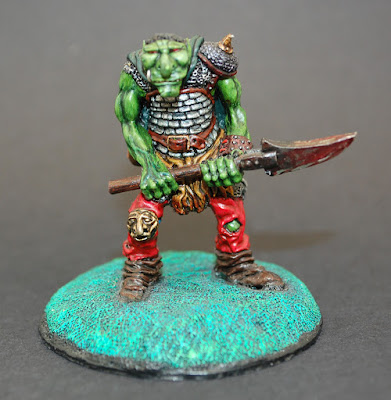 But the two goblins Kev refers to certainly were not cast: 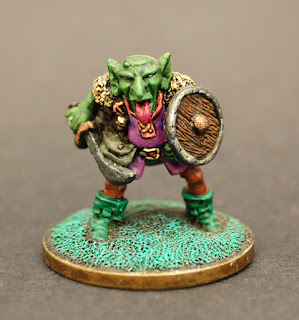 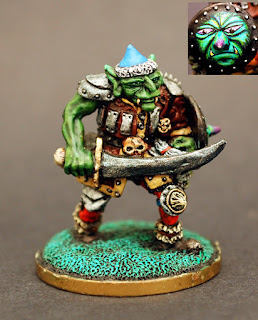 I made a few more and met up with Bryan at a Citadel open day at Eastwood, he said, well I suppose I had better offer you a job then and walked away leaving me excited. Later in the day he took me upstairs and said that he prefers to employ people who have many models under their belts and my heart sank. But I said, well I'm unemployed so have nothing to lose -  if you give me a range I will make it and if it's no good I will keep trying anyway. So I was given a choice of lesser goblins or beastmen. I took the goblins and went away happy and got stuck in. Everybody at Citadel loved them and I got nice feedback.The little goblin with ball and chain is my favourite out of them all, his face is based on the style of Tom Meier's goblins with puffy eyelids: 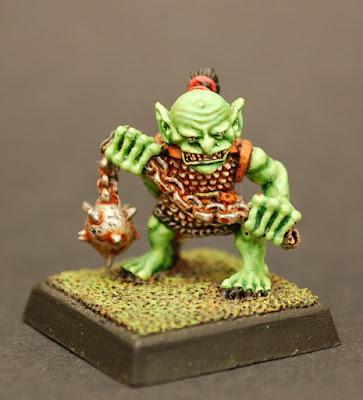 I still use that style and theres many in the Warmonger range, that's the style, my favourite style. The range I made had to be changed to work in the moulds and I embarked on a long period of learning the hard way while being guided by Alan Merrett. I was formally employed and went on to the beast men next.

Kev is renowned for the sense of humour he introduces into many of his sculpts, and this next figure is no exception:

This is actually a green that has been painted. I'm not entirely surprised it wasn't moulded - even in Citadel'c more risque times of the 1980's this figure would probably have crossed a line!

Next is another figure that is partly a painted (unreleased) green and also goes to show Kev's imagination as a converter:

The rider is a green, but the mount is converted. Can you spot what the original figure for the mount would have been? Leave a comment if you know; I'll put you out of your misery in the next post!

Here are a selection of goblins and snotlings that were sculpted and painted by Kev: 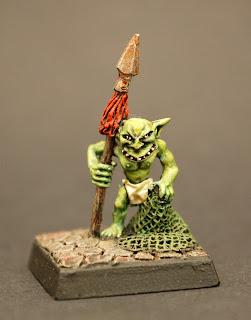 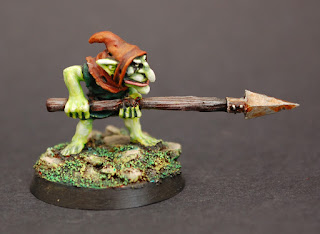 The next two were sculpted by the Perry twins and painted by Kev: 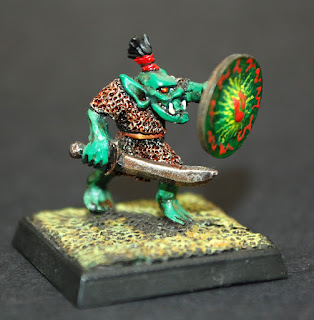 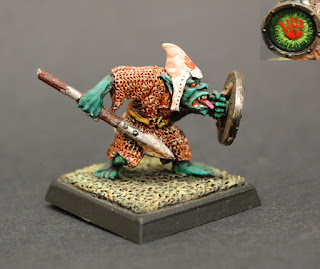 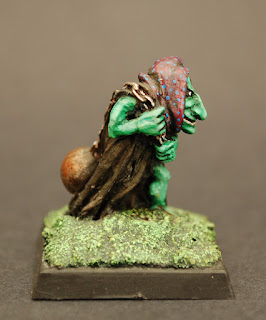 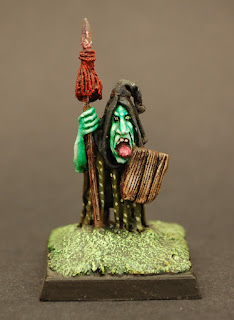 The next figure is a bit of a mystery. It was painted by Kev and is a head conversion of a casting (possibly Jes Goodwin):

Kev sculpted and painted the second version of Grom's Goblin Guard, one of Citadel's earliest Regiments of Renown:


Finally for today's post I want to leave you with one of Kev's stunning standard bearers: 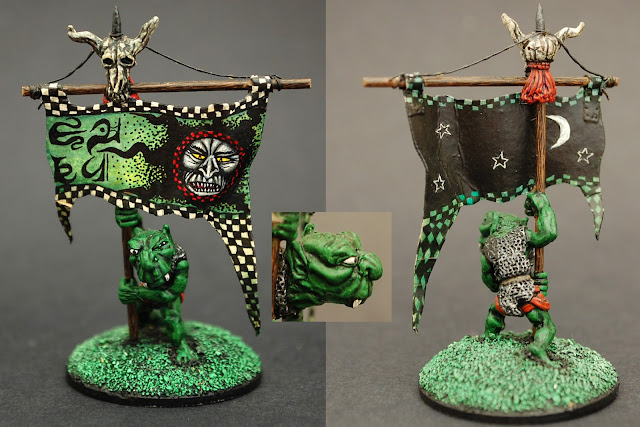 There's plenty more to come, including some more conversions and unique sculpts, some orcs that are my favourite of Kev's figures, and of course his war machines.
Posted by Steve Casey at 13:43