This flier opens with plugging the expanded range of Citadel Orcs, and introduces Orc army lists for use in Warhammer's first supplement (which became Forces of Fantasy). The Orcs in question are the Perry twins  C15 and C16 Orcs, which are among my favourite of Citadel's figures. I know that for many people reading this blog Kev Adams will justifiably always be the Goblinmaster (Goblin-oid-master?) but for me the Perry Orcs are the best. The army list on the flier would be modified and expanded for Forces of Fantasy, but represented a good stop-gap for those players (me included) who were gagging for rules for using massed ranks of Orcs. The flier also features a mailing club offer - fancy a battalion of orcs (80 figures) for £27.50 post free?

The flier next deals with new rules for using swarms of creepy-crawlies, together with rules for summoning swarms with magic. I suppose they would be called mini-beasts these days. Summoning a swarm of mini-beasts isn't quite so intimidating is it?

The flier ends with an interesting set of rules - and short story - on using the new 15mm Traveller robots in fantasy games. The mixing up of fantasy and scifi was being touted quite heavily at this time by Citadel, and features in a number of their articles and supplements. I have to confess at the time I wasn't too big on this - but shortly afterwards I got into the Moorcock books, and my opinions changed! 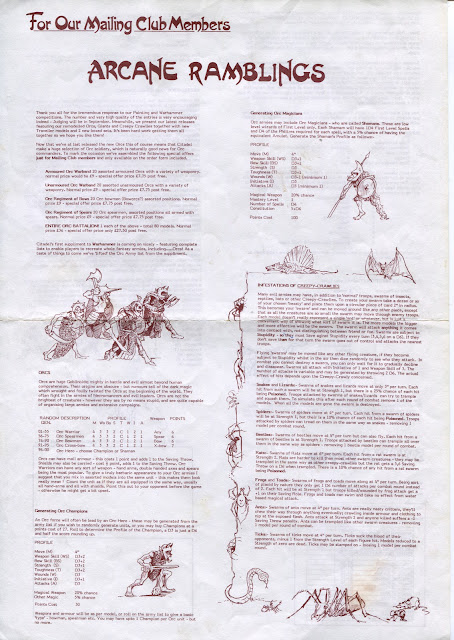 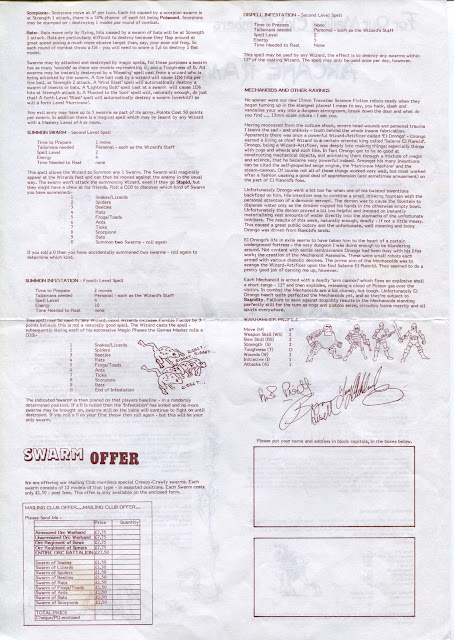 This flier features two articles on new rules for arcane rods and power weapons in Warhammer. Both of these new types of weapon subsequently found their way into the Warhammer Forces of Fantasy supplement. The opening text of the flier indicates that these articles "form part of Bryan's gigantic Chaos Saga, the entire design of which remains a secret as yet unfathomed by any of us - but we hear rumours....". Both weapon types are said to have originated with the Old Slann, and sound great fun. I think I may have used the rules for these back in the day, but that memory if hazy with the mists of time. The rules read like they were designed more for an RPG rather than a tabletop battle, in keeping with the first edition of Warhammer.

The Model News section of the flier deals with new releases of fighters, chaos knights, lizardmen and troglodytes. It also plugs the newly-released "after only months and months of the original sitting in our office" (I wonder why?) Tony Ackland's Monsterous Orc War Machine, and mentions his forthcoming Dwarf Steam Engine (aka Dwarf Juggernaut or Dwarf Jugganaut as depicted on the box).

The Competition Results section announces the winners of a painting competition and a competition to design a Warhammer character. I'm pretty sure the painting competition originated in another flier (more on that in a future post). The chracter competition was announced in the First Citadel Compendium (the first prize being one of every figure released by Citadel in April 1984, apparently worth at least £20). The winners of the character competition were announced in the Second Citadel Compendium and released as figures. Interestingly, Prince Ardelon was released as a foot figure despite the competition sketch depicting him on a horse. I am not aware of a mounted version ever being designed.

Next up is a plug for The Lidless Eye, "a revised and expanded set of Fantasy Army Lists designed for gamers using Wargames Research Group Ancient rules to re-create Tolkien's Middle Earth Armies." The ad goes on to state that these rules are not available from Citadel, but must be bought elsewhere (ah, those were the days...). This plug is followed by some special deals for mailing club members - fancy 30 Chaos Knights for £10 post free?

Finally, the reverse of the pink flier, as well as having some fantastic illustrations by Tony Ackland (I'm going to run out of superlatives soon) has a great request for ideas for chaos attributes...treat yourself with a read... 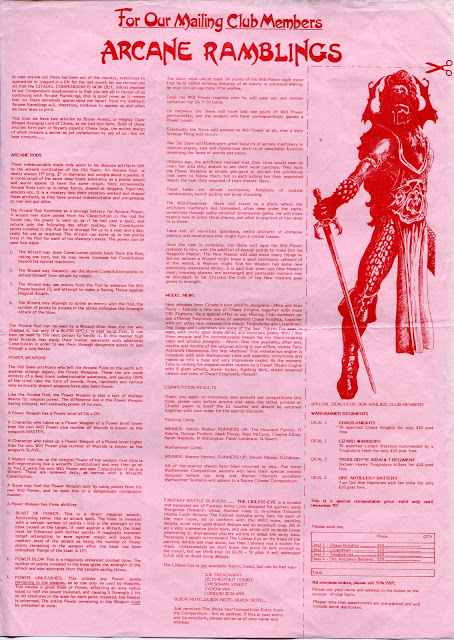 The final flier mainly deals with rules for the new Great Spined Dragon (including an extensive natural history) and for the new C22 Creatures range.

Did you know that nothing interests a dragon more than a fully armoured knight? Or that giant rats hate giant shrews (which can be used as mounts for halflings!). Read on... 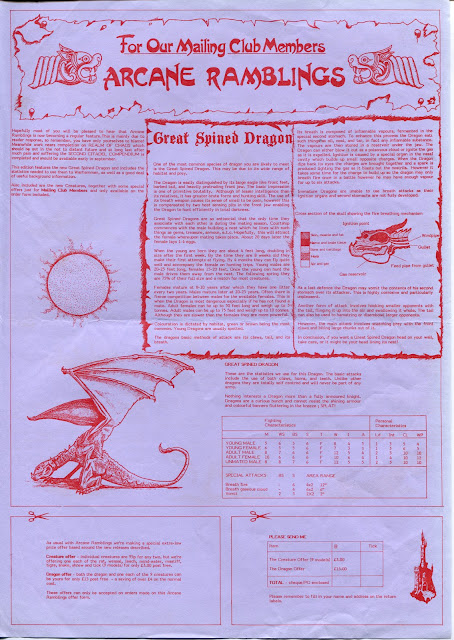 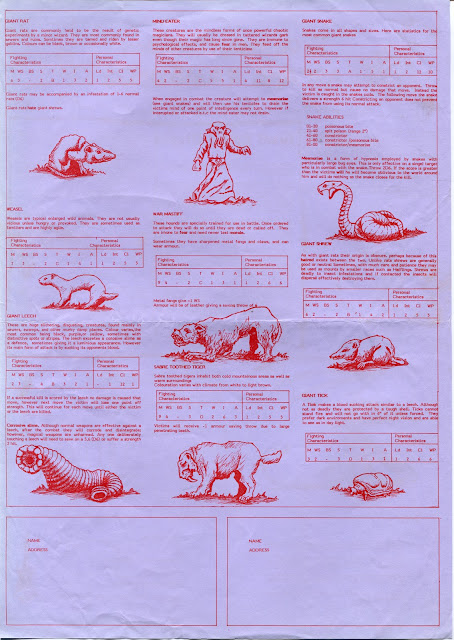 Finally, I mentioned I had three Arcane Ramblings fliers, but I do also have this one: 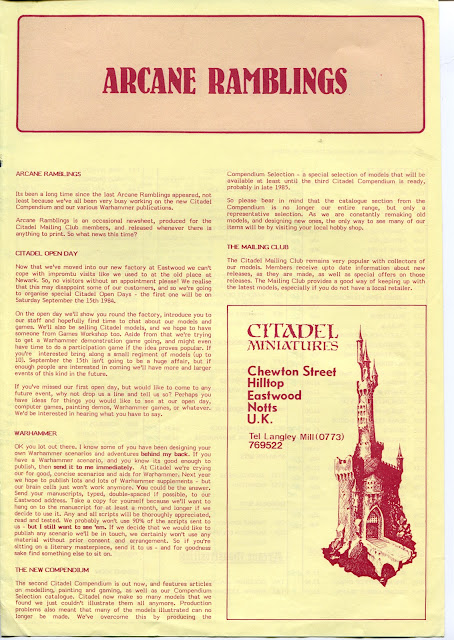 The trouble is, I can't remember if this was released as a stand-alone flier, or if it was inserted into a catalogue. Either way, it mentions plans for the forthcoming first Citadel Open Day (more on that in future) and asks readers to submit ideas for scenarios.

Have any of you entered competitions, or submitted material that was used to supplement Warhammer, back  in the early 1980's?
Posted by Steve Casey at 15:17