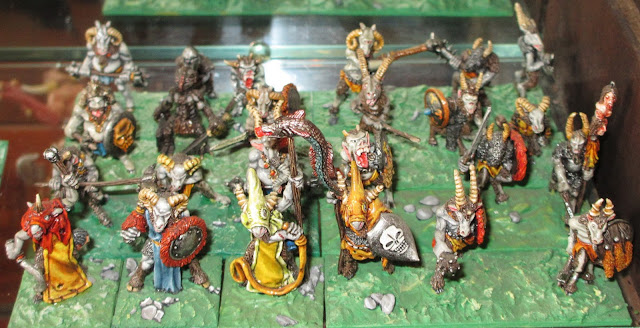 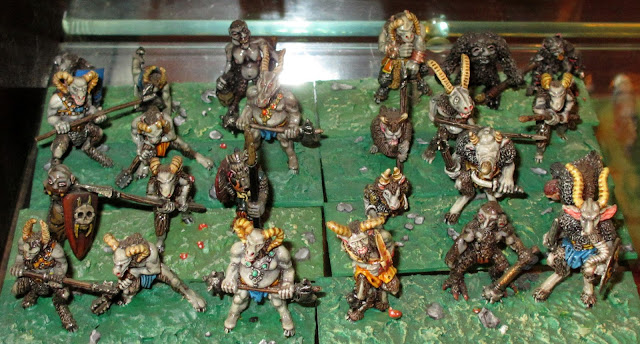 Above: the Goat-headed Ogre makes an appearance again, and there are quite a few more C38 Beastmen scattered among the Broo.

Above: some undead and chaos warriors creeping into this group. The main figure of note is the chaos warrior on the front row, third from the right. This is the Chaos Champion that leads a 553 points unit of 25 beastmen in Bryan's army. The unit was gifted with two dominant chaos attributes (Blood Rage, Great Fangs) and the champion had two personal attributes (Mace Tail, Magically Resistant). From initial glances it doesnt seem as if the attributes in the chaos army were actually modelled on the figures. I'm pretty certain the champion was painted by John Blanche; it certainly bears his style. The figure itself was sculpted by Bryan, and it is a conversion (weapon swap) of an unlisted Chaos Warrior. The figure is fairly uncommon - I hesitate to use the word rare - and when it appears on ebay it doesn't tend to fetch high prices so if you want one chances are you'll get one without having to fork out too much or spend too long looking. In my opinion its a nice figure with ornate but not OTT chaos armour.

The sharp-eyed among you may be wondering if the Grim Reaper style figure on the second row from the front, second figure from the right, is another one of the Chaos Champions from Bryan's armour. I don't think the colour scheme matches though, so its probably a different figure.

The 553 points unit mentioned above also had a standard bearer that was a converted Fantasy Tribes Hobgoblin. Apologies for the rather poor pics but here's the standard plus a close-up of the zombie perched on top: 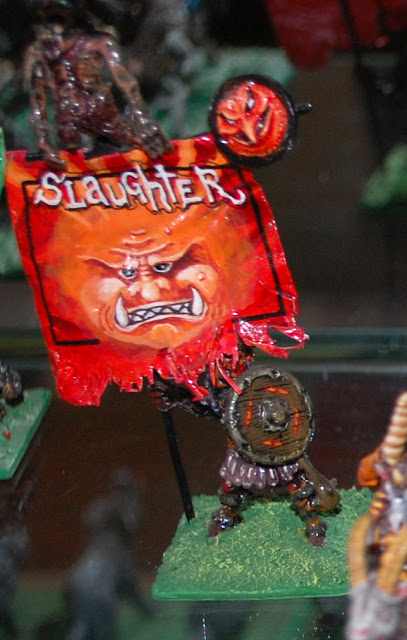 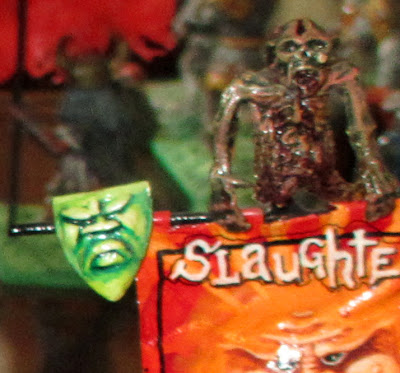 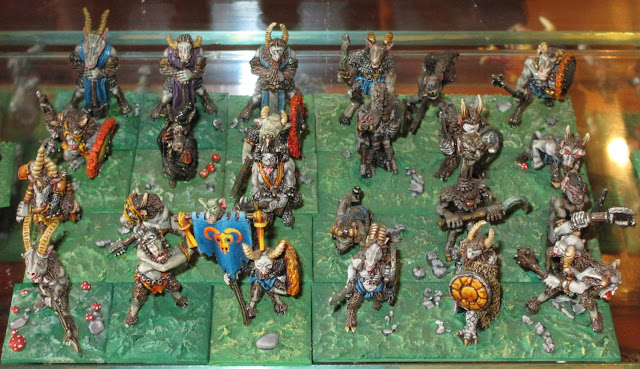 Above: another mixed bunch of beastmen (there's that Goat-headed Ogre again) with a unit standard - this particular standard doesnt seem to have made an appearance in the Warhammer Armies chaos army.

Next up we have some groups where slotta rather than preslotta beastmen are starting to dominate. You'll also see that there are a number of non-Citadel beastmen scattered among this lot (if anyone recognises the manufacturers I would love to hear from you): 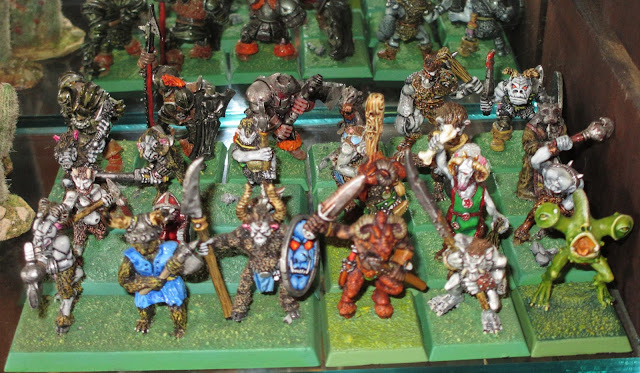 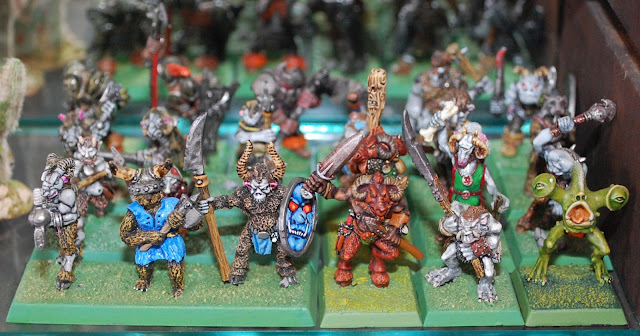 Above: I've posted this group before, but not face-on. Of particular note are: Ivan Bartleet's chaos conversion (far right, front); and the chaos thug who was in one of the units in Bryan's army, and who I presume was the unit champion (back row, second from right). Here is the standard from that particular unit: 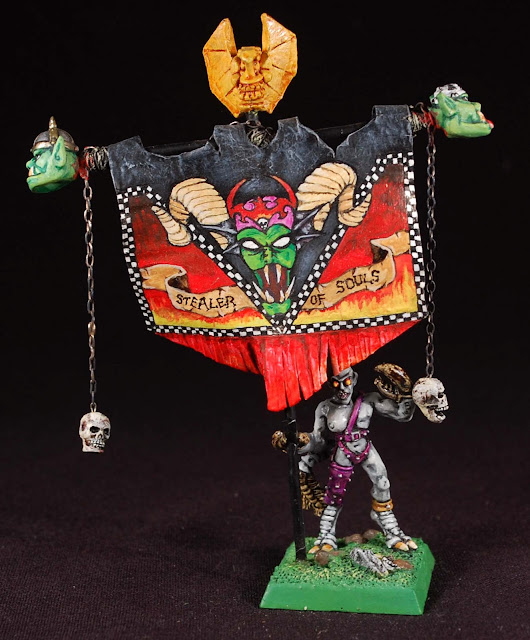 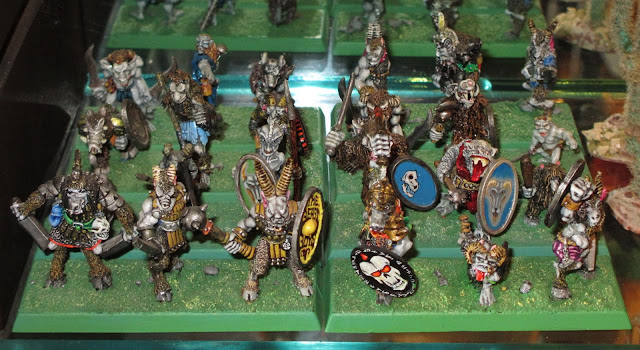 Above: some more beastmen, several of which I recognise from Bryan's army. The yellow shield reads "The Beast Boys."

Here are a group of chaos hounds, some of which appeared in Bryan's army, and not all of which are Citadel. The two-headed hound on the back row, far right is the figure for Spot the Hound from the McDeath scenario. This figure is often confused with a similar looking hound that went on general release, but Spot has a spiked tail:

Here is the army's Hydra, which "has been bound to the service of the Horde by the unspeakable rituals of Doomweaver Goreblast": 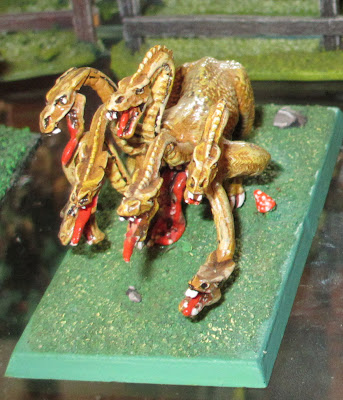 Lastly a couple of the main characters. I really do apologise for this pic - when I took it I missed the fact these guys were in the group otherwise I would have isolated them for separate pics. Anyway, here goes:

So, back row second from the right is Soulflayer Peelbone, "fell sorceror and servant of the Chaos gods" and front row far right is Draken Doom, "formidable commander of the Chaos Horde." And here's his shield: 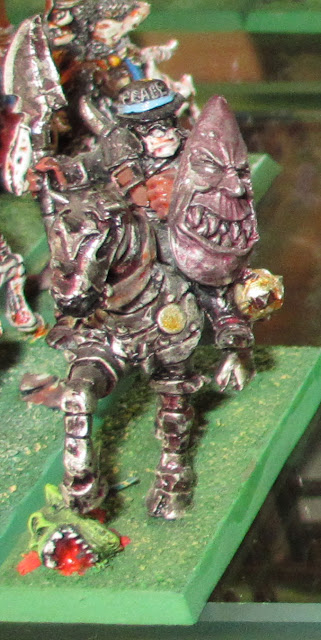 Hope you enjoyed those, more from Bryan's cabinet coming soon.
Posted by Steve Casey at 14:33