Last week I reported on the discovery of an unreleased Rogue Trader era "Trooper" sculpted by Bob Naismith. I also reported previously on a further mysterious figure that can be seen lurking in the background of an image from the original Rogue Trader rulebook. Well, a couple of sharp-eyed readers of this blog have left comments regarding another mysterious figure in the this image, which I completely missed, the "8 ball head", circled below:

It is of course none other than the "trooper" that came to light last week! So a big thank you to those of you who pointed this out; no idea how I missed this one... 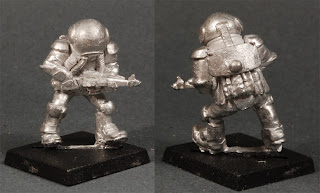