The Oldhammer Forum has been running a painting challenge organised by Jon Boyce (aka axiom) as part of their Oldhammer Legacy Warband theme. The premise is simple - contributors paint a themed model (this year's theme is "space pirates"), all contributors enter a draw and the winner gets to keep the entire warband. Due to the disparate nature of entries, a spot colour of turquoise has been chosen, and the eventual winner will do the basing, to tie the warband together.

My contribution was originally intended to be an "alien bounty hunter". I had the idea of converting an old Citadel Fiend Factory figure, but somewhere along the way I lost it! It was while I was looking for the figure that I hit upon a different idea after discovering the body of an old Citadel AD&D Umber Hulk and the head of an old Citadel C Series giant in my bits boxes. Odo was born: 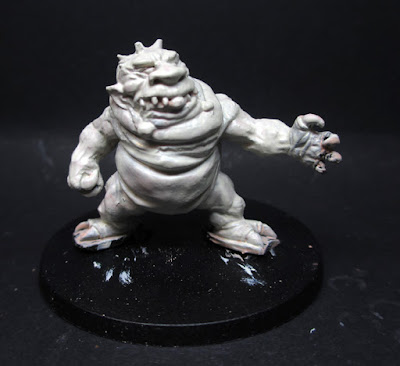 There was a slight problem though in that the neck area of the Umber Hulk's body was far too wide for the donor head. I was initially considering that Odo might be wearing some sort of baggy space suit, and so I would have needed to sculpt a helmet ring in the neck area. But I then decided that for maximum gross-out Odo should be naked, and that he is essentially an overweight mutant. So the helmet ring idea became rolls of neck fat. Nice. Using some greenstuff I sculpted some rolls of neck fat, which I have to admit I thoroughly enjoyed doing. I shall be looking to do some more conversions in future.

As he stands in the image above, Odo has been given a complete base coat in a pale colour, and I was planning on using chestnut washes and thin pale layers to build up an unhealthy skin appearance. I got the idea after attempting Andy Craig's step-by-step approach to paining a Blood Bowl player in White Dwarf 117. Andy used a chestnut was and pale layers for the skin of the player. Suffice to say my attempt was not exactly up to Andy's efforts, but it did prove a useful technique for making gross skin colours!

So here he is, front and back, with a heavy chestnut wash: 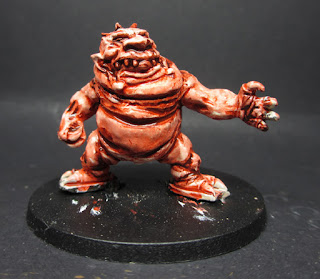 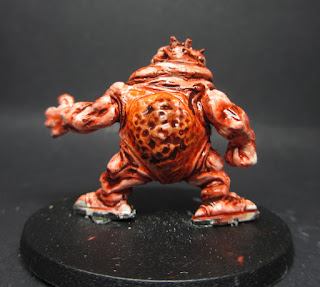 And here after a few pale layers: 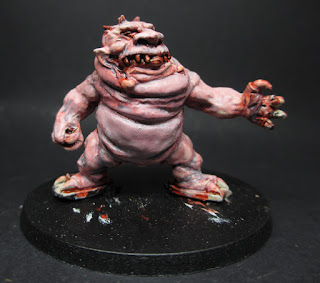 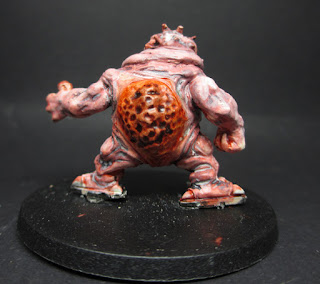 So next I needed to add the spot colour. The chosen colour was turquoise...I have to admit I slightly mis-read this as blue...Some dark recess of my mind immediately linked "space pirate" to Melange (the spice from Dune) and Odo the Melange-addicted mutant space pirate took shape: 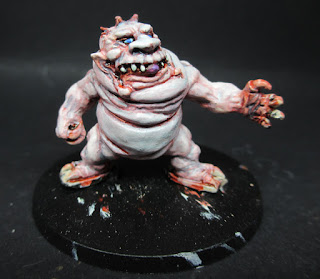 At this point Odo didnt have much of a sci-fi feel, so with the help of my bits boxes and a few choice components from Zinge Industries I did some converting: 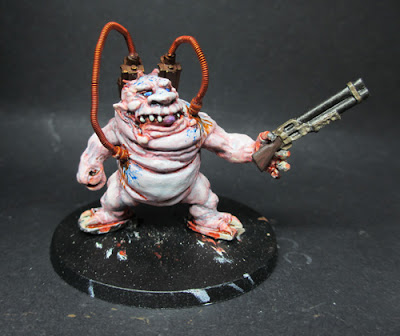 So there you have it. He's been shipped off to Jon's departure lounge and soon we will know who gets to keep the motley crew.
Posted by Steve Casey at 11:18