The mysterious case of the psychotic troll, the skeleton guardsman and the great goblin hero

If you peruse the pages of The Stuff of Legends website that deal with the limited edition Citadel figures of the early 1980's, you will find two figures whose origins are somewhat shrouded in mystery: Fergus the Psychotic Troll and a skeleton warrior. We have some knowledge of the origins of these figures, but until now that knowledge has been incomplete. We knew for example that on at least one occasion Fergus has been sent to someone who on purchasing Citadel figures discovered that the mail order troll responsible for the order made a mistake, and Fergus was sent by way of an apology. We also know that the skeleton warrior has been spotted attached to one of Citadel's "limited to 1000" labels.

I recently obtained an old mail order flyer which sheds more light on the origin of these two figures. The flyer in question was presumably released in October 1982 - it bears "October" in the title and fits the pattern of similar flyers produced in 1982 as seen on SOL (note the November flyer for the giveaway figure Grogus): 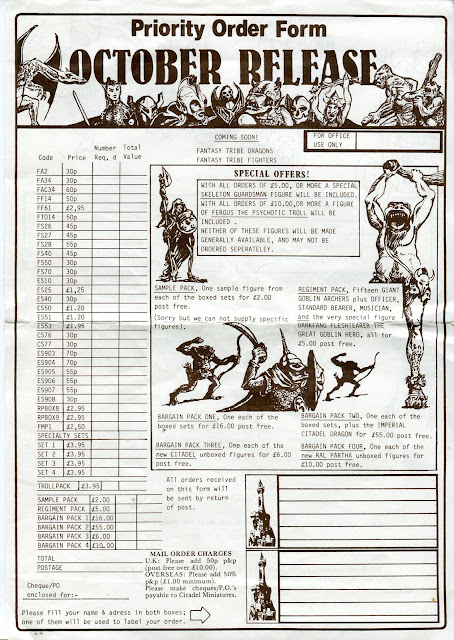 There, under SPECIAL OFFERS! it indicates how the skeleton guardsman (not warrior) was available for free to anyone who placed an order of £5.00 or more, and Fergus to those spending £10.00 or more. During the following month (November), a similar offer made available Grogus the Ogre Warrior and Vargus the Soul-Stealer (chaos commander).

Now, what is slightly unusual is that in my experience Fergus is far more rare than Grogus, and yet they were made available in the same manner, just one month apart. As far as I can work out the possible explanations for this are as follows:

1. The "£10.00 or greater" deal in November was far more popular than the October deal, and therefore far more Groguses than Ferguses were sent out.
2. Grogus was subsequently made available after November, whereas Citadel kept to their word for Fergus and he was no longer available after October 1982 (or at least in far smaller quantities than Grogus).

I favour option 2 above, but I dont know why that would be the case. Perhaps there was a casting issue with Fergus? It is sad that Fergus is so difficult to obtain, because he has bags of character.

Now, here's a weird coincidence for you. Until recently I only had a broken Fergus in my collection, having sold my last intact one several years ago. I say until recently because, on the very day that I received a small collection of flyers, including the one explaining the origin of Fergus, I received a collection of figures, from an entirely different seller, which had an intact Fergus in it! I had no idea the figure was in the collection. So there I am reading with nerdy glee the origin of Fergus, I turn to my next package from the postman and there I find an actual Fergus! And here he is in all his paint-stripped glory:


So that's it, mystery solved. But hang on, if we go back and re-read the flyer, another special offer is mentioned: if you buy a regiment pack of goblins you get "the very special figure DARKFANG FLESHTEARER THE GREAT GOBLIN HERO." Now, the giant goblins that formed this deal were actually Ral Partha, available in codes CS70 - CS79. The only giant goblin chieftain in that line bears no resemblance to what I presume is the sketch of Darkfang above (with the pointy helmet). Given that the skeleton guardsman, Fergus, Grogus and Vargus (what's with all the "gus"s anyway?) were all unique sculpts it might be reasonable to assume that Darkfang was also unique.


Do you know Darkfang? If so please leave me a comment and put me out of my misery..