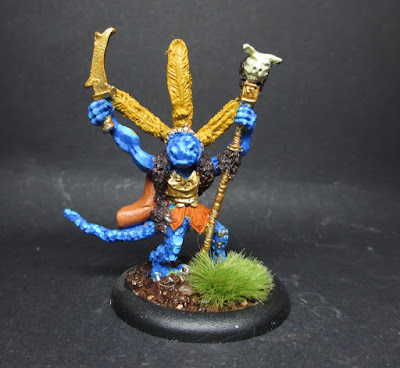 The particular spelling of his name is very important - he gains an extra "f" for every member of his unit. Currently this stands at four, so he has four "fs". This is an ancient tradition among Troglodytes, although much beyond four it becomes a bit superfluous, given the extreme stupidity of Troglodytes.

This guy weighs in at 86 points. Not quite the 100 for the month, but I over-compensated for that last month by having a 176 point, four Troglodyte unit. Here he is in a nice group shot chilling with his homies:

So now I have to face up to reality. There is nowhere left to turn. Next month, the Slann are coming...

Why not check out the losers my buddies' efforts this month: