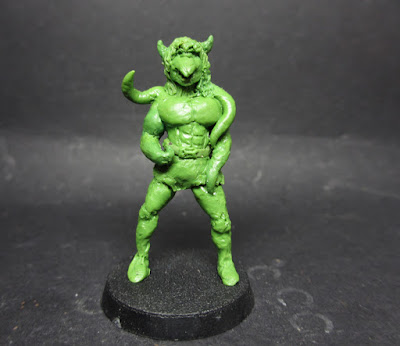 Now, you may well be thinking "WTF" at this point, so I think a little context is in order, together with a few notes as to how I tackled this sculpt.

My first sculpt was a fairly heavily armoured chaos warrior, so I thought on this occasion it would be worth trying to sculpt something with a bit more flesh on view so that I could practice musculature. My first thought was to sculpt a barbarian, but I kept being drawn back to chaos. I looked through various illustration in the old Citadel books and catalogues and happened upon this one in the first Citadel Compendium (circa 1983): 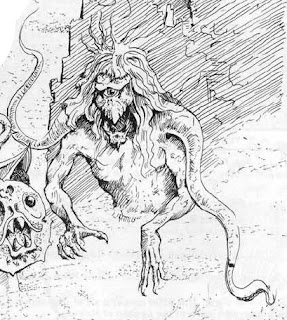 A wonderful cyclopean chaos mutant, I suspect from the talented Mr. Akland.

My first job was to create a simple armature, and I used some very useful Youtube tutorials for this. I then started work on the torso, and it quickly became apparent that this guy was going to be a bit more "ripped" (is that the correct term?) than the one in illustration. This was partly due to the way I sculpt, which is to correct odd looking bits of sculpt as I go along, adding layers of greenstuff. No problem I told myself.

Next I added the arms and upper tentacles. At this point the intention was to keep just one pair of tentacles.

Then came the head, minus the hair. At this stage I took a step back and wondered if hair would work so well. I think part of the reason that the straggly hair works well in the illustration is that the creature's body is quite withered itself. How would straggly hair work with a ripped body? I decided to take the plunge...

I think its fair to say that the addition of the hair totally transformed the figure. Whether that be for good or ill, I'll let you judge! But I was quite pleased with how the hair ended up, even if it was not the effect I was aiming for initially.

Next came the legs. By the time I got to the hands I had pretty much had enough, and I wasn't in the mood for attempting to sculpt hands. So I took the decision to sculpt two more tentacles. Due to their rather unfortunate positioning I found that no matter where I placed the tentacles the eventual pose appeared rather...shall we say "suggestive"...so what you see is the most "innocent" pose I could achieve.

He has to be a Slaanesh champion of course (a Level 25 Hero), and here are his stats and chaos attributes:

Overall I'm pleased with this figure, even given the places that need improvement and its slightly odd appearance. I think I managed to get the size and proportions of the figure almost right, as this comparison pic shows: 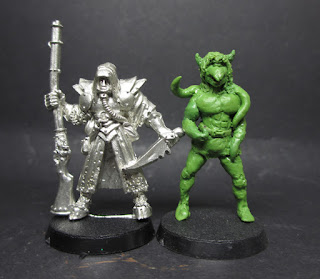