Over in the B.L.O.O.D. forum and across the bloggosphere, ascendent chaos captains are beginning to nail their colours to the mast for the forthcoming Oldhammer Weekend over at Wargames Foundry. Will it be Khorne? Will it be Slaanesh? Or will you - ahem - swing both ways? In true chaos style you may choose to rebel and align yourself to one of the other Great Powers - some putrescent Nurgle perhaps? Or if you really can't decide then Tzeentch may be the one for you... Whatever chaos god you choose to align with, a staple troop choice of many a chaos warband will be the humble beastman. There's a 30% chance you'll acquire some beastmen each time you roll on the retinue table, if that's the route you decide to take in generating your warband.

OK, let's assume you've decided to stick with convention in this Slaves To Darkness anniversary year and go for Khorne and/or Slaanesh. What will be your colour scheme? According to John Blanche (and let's face it, he's the man in the know):


"A livery mainly composed of the martial colours (red, black and brass) suits the followers of Khorne perfectly, whereas Slaanesh has pale skinned followers bedecked in pastel shades, offset by shiny black leather and studs."

If you decide against these colour schemes, then good for you - your place in the pantheon of chaos will be assured. If, however, you decide to follow tradition and John's suggestions you'll be following in the footsteps of the great and the good. Let's take a look at some of the colour schemes evident in Bryan Ansell's collection.

First up is Khorne:


Chap on the left has a fairly bog standard colour scheme, while the other three introduce some subtle differences. Notice the spotting on the skin. You'll see this on lots of the figures from the RoC books. It is a technique advocated by John to unify and neaten up figures. I think it works.

I love these! The black/red contrast on the left-hand figure is really effective, and the edge highlights on his axe look good. The two figures on the right prove that you don't always need to follow convention to achieve some great results. It is chaos after all! And they're still Khornate, right? OK, back to earth for this next lot:

Simple but effective, and very little brass, black or red in site. Notice how these are the same basic figures as above but with different weapon heads. Actually, come to think about it these may not actually be Khorne - I'll have to take a close look at some of the RoC reference pictures...

Here, however, are some beastmen whose allegiance is unambiguous:


That's enough blood for the blood god. Next up is Slannesh:


OK, they may be painted fairly simply by today's standards, but the sickly green/black colour scheme works well. I hadn't previously noticed the markings on the waist, or that binding around the right leg. Can anyone remember if these are some sort of hallmark of Slaanesh?


You'll find that many of the Slaanesh beastmen, and Slaanesh chaos champions too, have the flesh of one leg exposed while the other leg is wrapped in clothing of a certain persuasion. It's details like this that give these excellent old figures such character.

Back to the hood, waist markings and right leg binding again (there must be a pattern emerging?): 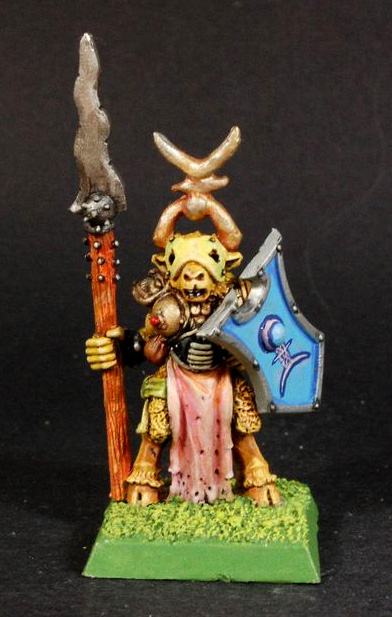 I love the muted browns on this figure, and good subtle use of shading. Lastly for Slaanesh (you may want to don your sunshades at this point):

Finally, if you thought the above were old-skoooool, check out these next ones: 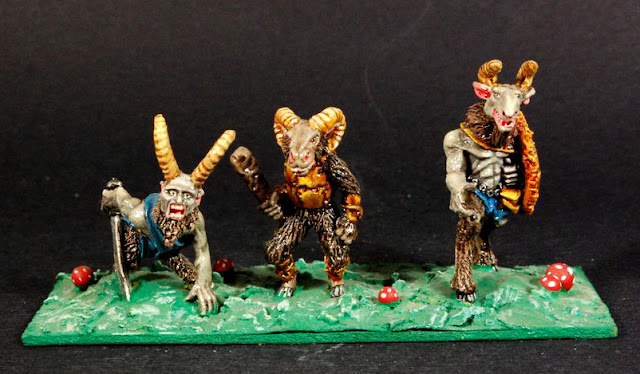 Heralding from a time when the four chaos powers were just a glint in Bryan Ansell's eyes, these are the original Citadel beastmen from the Runequest lineup back in the early 1980's. Bryan ranks the RQ beastmen as his favourites of all the Citadel beastmen, and I have to say I agree with him. It's probably nostalgia - they were the first beastmen I bought - but the RQ beastmen were "proper beastly"  - have a look at this advert from the first Citadel Compendium: 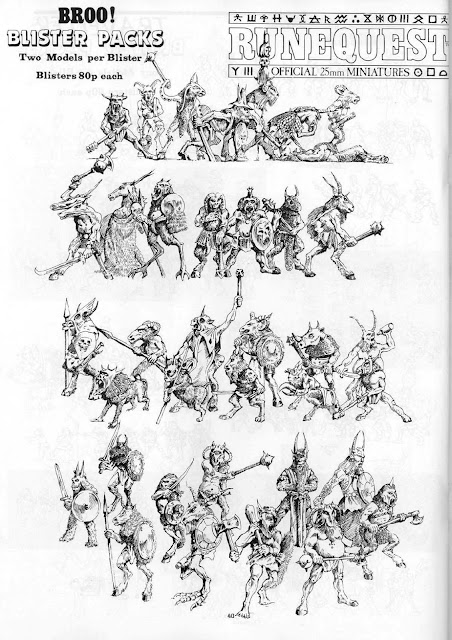 I'm sure you'll agree there's a fantastic selection of chaos mutations scattered among this lot, and giving that they are 30-ish years old, the sculpting quality is actually very good - well, they are Perry sculpts after all...

You can see these figures and more in my Bryan Ansell gallery, to which I'll be uploading lots more new pics this week.