Blimey, I can't believe it's been 4 months since my last post. Being the hobby butterfly that I am, I'm currently back in the fantasy/scifi vibe with my historicals taking a bit of a break...go with the flow, eh?

So here's a roundup of what I've been upto so far this year.


Back in 2014 I reported (here and here) on some unreleased figures that I'd found in Bryan Ansell's collection, which we believe may have been unreleased prototypes for Heroquest. I've been very lucky to acquire a set of these, which I've started to paint. So far I've completed the wizard and the elf: 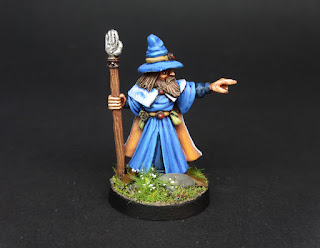 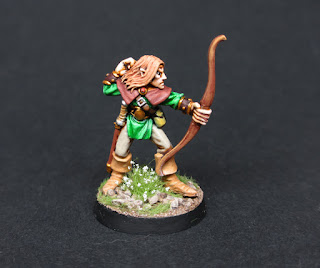 I'm really please with how these have turned out, with the colour scheme being just what I was aiming for. The colours are mainly Wargames Foundry, and a couple of Vallejo and GW shades. I'm particularly pleased with how the elf's hair turned out, which is GW Kislev Flesh washed with GW Reikland fleshshade. Also, Foundry's Vivid Blue triad (on the wizard) is one of my favourite colours and a joy to use.

Stay tuned for the other members of this set.

This is one of GW's so-called "limited editions" of the late 80's: 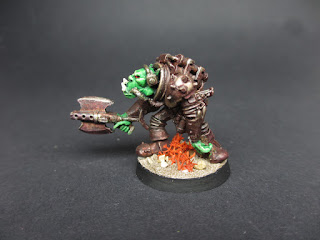 My initial intention was to take my time and put a lot of effort into this one because I think it's such a great sculpt, but sometimes our painting hands take us in a different direction, and it ended up being a quick wash and drybrush job. It doesn't have high levels of finesse but I think it works :-)

Having enjoyed the quick job I did on the space ork, I thought I'd try a similar approach on a nurgle marine: 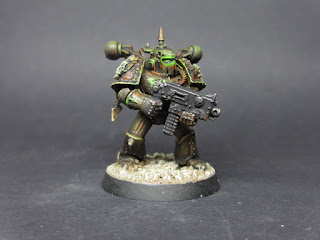 He's a Forge World plague marine torso added to a standard GW chaos space marine pair of legs. I've added a green glow from the eye sockets and a bit more rust, but it's essentially the same approach that I used for the ork, and has since become a bit of a standard for me for old/rusted armour. Here's the technique I use:

1. Base coat with a couple of washes of Vallejo Model Air Charred Brown (usually without bothering to prime it first).
2. Layer of GW XV-88.
3. Wash with Vallejo 76.506 rust wash.
4. Drybrush well with a gold colour, and drybrush silver on the raised areas. I use GW's dry paints Sigmarite and Necron Compund respectively. I know the dry paints seem a bit gimmicky but they work for me.
5. Wash with old GW Skaven Brown ink diluted with Vallejo airbrush flow improver. This helps push the ink into the crevices. Skaven Brown is a strong ink, and without the flow inrpover it would stain the surface too much for my liking. One drawback of using the improver is that it takes a few hours to dry properly. I find it a fun technique.
6. If desired wash with rust wash again, or GW Nuln Oil or Agrax Earshade, as desired.

Steps 3 and 4 can be repeated until you have the shade/depth you require.

Here's a skeleton I painted with the same technique: 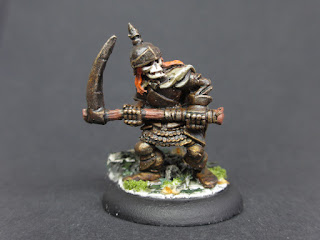 I mounted him on an old resin scenic base I had. It depicts some temple ruins and I've added some vegetation. Really not happy with the base and I can't quite pinpoint why!

I'd also like to share a couple of WIPs that I started earlier in the year, but abandoned to the hobby butterfly for various reasons.

First up, one of the latest Death Guard range: 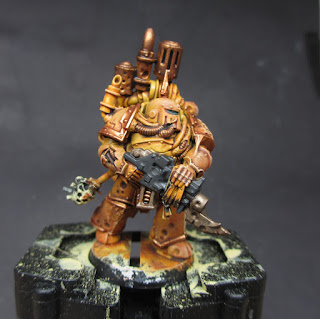 I'm quite please with the early stages of this figure, but I became a bit daunted with the amount of detail and "fiddly parts" on it so it was put to one side. I might return to it when I feel up to the challenge. So far it's a mixture of my XV-88/light rust wash technique with lots of drybrushing with Terminatus Stone and Kindleflame.

Finally a Slaanesh Champion that I abandoned when I quite frankly got bored with it! Don't know why because looking at it again I like how it's come on, and to be honest it's so close to being finished I might as well just get on with it! 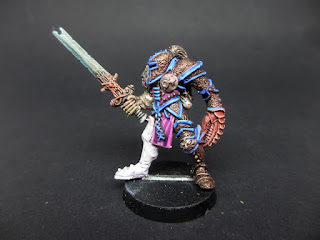 I like how the claw has come out, but I can't quite remember how I did it, except that the final highlight was a drybrush with Kindleflame. I should blog more often if only as a means of recording my recipes..!

Finally I've nearly completed a small Nurgle space marine warband, but I'll leave pics of those to another day.
Posted by Steve Casey at 11:48